Can I keep my current health insurance policy under health reform? 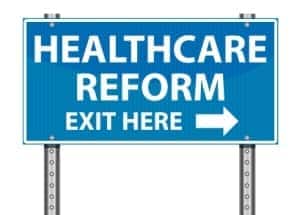 If you already purchased your own health insurance, you may be able to keep your current policy, but that might not be your best choice.

"You might be able to get a much better deal on the exchange," says Timothy Jost, a law professor at Washington and Lee University. Some older policies are bare-bones plans. They may have extremely low premiums but out-of-pocket costs can be astronomical, reaching tens of thousands of dollars for individual coverage, he says.

"There's some really skimpy coverage out there," he says.

With the opening of the state health insurance exchanges, also called marketplaces, consumers have a broader array of options under the provisions of the Affordable Care Act (ACA).

Open enrollment for coverage this year ended March 31, though it was extended to April 15 for those who began the application process before the deadline but could not complete it. However, if you experience certain hardships or there is a change in your family or marital status, you may qualify to buy a plan after the deadline. Open enrollment for 2015 health insurance plans is Nov. 15 through Feb. 15.

Outside the marketplaces, the health care reform law lets insurers sell health plans beyond the annual open enrollment period. In most states, though, insurers are choosing to limit sales to that time-frame. Insurance companies don't want consumers to wait until they get sick to buy coverage. Nevada is the only state so far requiring insurers that sell plans outside the state's marketplace to offer those plans year-round.

Policies bought on the new health insurance exchanges must provide a set of certain benefits, including free preventive services, and include a cap on how much you pay out of pocket for care. Premium discounts in the form of tax credits, as well as subsidies to reduce copayments and deductibles, are available for those who qualify. Insurers cannot deny coverage based on pre-existing medical conditions.

Insurers must disclose in plan materials describing benefits if the policy is grandfathered.

If your plan is grandfathered you can keep your current policy, but you won't necessarily receive the same benefits as policies offered on the state exchanges.

What are some of the differences?

A policy sold on the exchange must cover 10 essential health benefits, while a grandfathered plan is not required to do so.

The 10 essential benefits are:

Preventive services, such as your annual physical and mammogram, are provided for free under plans purchased on the exchange. With a grandfathered plan, you might have to pay a copayment or deductible for that same preventive care, says Sally McCarty, senior research fellow at the Georgetown University Health Policy Institute.

A grandfathered plan also isn't required to cover you for a pre-existing condition.

And grandfathered plans aren't required to undergo rate reviews if your insurance company is seeking an excessive premium increase, says Lynn Blewett, a professor in the Division of Health Policy Management at the University of Minnesota.

Like an ACA-compliant plan, a grandfathered policy can't have a lifetime limit on coverage. But it can have annual limits, such as a half-million or a million dollars a year, Blewett says. If you exceed that cap in a particular year, you'll have to pay the balance yourself.

Are there similarities between grandfathered and ACA-complaint plans?

Under health reform, a grandfathered plan, like an ACA-compliant plan, cannot arbitrarily cancel your insurance coverage, and both types of plans must cover your adult children up to the age of 26.

Both types of plans also require that health insurance companies use the bulk of the premiums that individuals pay to cover health care and quality improvement costs, rather than administrative costs.

Under the 80/20 rule, or medical loss ratio, if an insurer spends more than 80 percent of the premiums they collect on marketing, administration and similar costs, they'll have to issue you a rebate.

Are there financial differences?

One key difference is that if you purchase a policy outside the exchange, you won't be eligible for a tax credit to help offset your insurance costs.

The subsidies, which will come in the form of tax credits, are designed to help cover the costs of insurance. Subsidies are based on your earnings and your family size, and are available if you earn up to 400 percent of the federal poverty level. With a family of four you can make up to $94,200 and still be eligible for a subsidy. The less you earn, the greater the subsidy available to you.

According to the Department of Health and Human Services, with the subsidies, more than half of Americans would be able to find coverage for less than $100 a month, though they may choose to pay more.

Plans purchased on the exchanges also have caps on out-of-pocket costs. Typically, the maximum an individual will pay in copayments and deductibles next year is $6,350, while a family's costs would be capped at $12,700.

Does it ever make sense to keep your grandfathered plan?

Policies sold on the exchanges might have a limited provider network, Blewett says. If you already have a good relationship with your doctor, you might not want to switch to a new doctor, and that could be a reason to keep your current policy.

Finances are also a consideration. A grandfathered plan "could be really cheap but not provide great coverage," because these policies don't have to cover the 10 essential health benefits, Jost says. If low premiums are a priority and you have enough money to cover your deductible, you might want to keep your grandfathered plan.

Or if you're young and healthy, "you may want to wait a year and let the exchange shake out a bit," Blewett says.