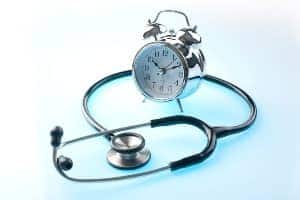 If you haven't bought health insurance yet, it may be time to panic. You have less than a week to buy coverage or you may have to pay a penalty when you file your 2014 taxes next year.

The Affordable Care Act requires most everyone who can afford health insurance to be covered by April 1 or pay a penalty. That penalty could be a maximum of $285 for a family of four or up to 1 percent of the family income, whichever is greater.

If you want to buy a health plan through a broker or directly from a health insurance company, you have until March 31 to do so.

You may have a little more breathing room if you buy your plan from the government-run marketplace in your state. Late on March 25, the Obama administration announced it will provide extra time for those buying coverage on the federally run online marketplaces if they began the application process prior to March 31 but failed to complete it by the end of the month. The 14 states operating their own marketplaces are expected to follow suit, as many had been lobbying for extensions prior to the Obama administration's announcement.

"Officials said the grace period will be available to people on the honor system, meaning applicants will have to attest that special circumstances or complex cases prevented them from finishing by March 31. It's unclear how long the extension will last," according to a report by the AP.

There is some urgency because really the only reason you would want to buy from the government-run exchange or marketplace is if you qualify for a subsidy, Taylor says. "If you buy outside the marketplace, you should be able to get more choices, and likely a larger network that is more suited to your needs," she says. "Health insurance companies don't have to offer the exact plans in the marketplace as they do out."

So if the March 31 deadline is being extended for some marketplace applicants, why have one at all? Lawmakers felt they had to set a deadline or some people wouldn't enroll until they were sick and needed medical procedures. For the law to work, the government needs everyone to have coverage especially those who are healthy. Under the law, insurance companies can't refuse coverage based on your health status.

After March 31, if you aren't granted an extension, the only way you will be able to buy a health insurance policy through the government-run marketplace for the rest of the year is if something happens and you lose your current coverage. That "something" is known as a qualifying life event, explains Scott Ogburn, senior consultant at ECM Ferguson Solutions in Greenville, S.C..

That's true for employer-sponsored plans as well -- you can only enroll during its open enrollment unless you have a qualifying event. About 70 percent of employers have open-enrollment during the last two months of the year for coverage that starts Jan. 1, notes Taylor.

Sign up for health insurance within 60 days of event

To be eligible to enroll in health care coverage outside open enrollment you typically must do so within 60 days of the qualifying event. Events that qualify include moving to a new state that offers different health plan options, certain changes in your income such as going from a full-time to a part-time job, and changes in your family status or size.

You also would be eligible to enroll in the marketplace if you lose or quit your job and thus lose your employer-sponsored health-care coverage or if you have coverage through a spouse, partner or parent and he or she dies. If you decide to stop paying premiums or drop your health coverage for some other reason, it won't count. You won't be eligible for special enrollment.

If you have a disability or your income is low enough that you qualify for Medicaid or the Children's Health Insurance Program in your state, you can enroll in these programs at any time. They have no open enrollment periods, says Ogburn.

Penalties for not having health insurance will rise in future years

Under health care reform, you can go 90 days a year without health insurance and not be penalized. But if you didn't sign up for health insurance by March 31, you will have used up your grace period for the year.

Taylor suggests using one of the online calculators including at healthcare.gov to see if you would qualify for a subsidy. The subsidy is based on a number of factors including annual income, family size and age.