Most popular car colors of 2012 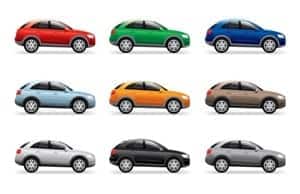 Consumers may ogle the car painted lipstick-red, but they tend to go home with the prim one all in white.

That's what PPG Industries, a Pittsburgh-based company that makes paints for vehicles and airplanes, suggests in a report released this week. Twenty-two percent of new-car buyers worldwide pick white cars, putting the color at the top of the popularity list. And 20 percent choose silver, which was the most popular car color from 2001 to 2010, and only 9 percent opt for sexier shades of red.

Here are the global preferences, which PPG says was culled from 2012 data and recent statistics provided by the auto industry in the U.S., Europe and Asia:

In North America alone, the most popular colors are as follows, according to PGG:

Jane Harrington-Durst, a PPG spokesperson and one of its "color styling" experts, attributes white's popularity to various factors, from its classic, reserved look to the color's use in several well-known products, including Apple's iPhone, MacBook and iPod.

A whiter shade of pale

But pity the fool who thinks white is just white. Various shades of the color add to its allure, says Harrington-Durst.

"It's not just plain white vanilla" that's attracting consumers, she says. "It's anything from a creamy white to a metallic white to a pearl white to an Arctic white. If you think about how Apple introduced a lot of its products, it's in white. So we think that maybe consumers have gained this interest in a bright white due to that."

While white will continue to be a favorite in the coming year, Harrington-Durst believes the next trend may focus on warmer tones.

"Oranges and browns will be popular," she says. "We obviously wouldn't call them just orange and brown. We'd call them something like 'element' or 'flame.' And then the browns would be like 'Godiva' or 'saddle' to kind of evoke the image that the color creates."

PPG adds that its research shows that auto-buyers are moving toward a more varied palette, with metallic shades in "gold, bronze and copper" also trending with consumers.

The PPG report, which included details from consumer surveys, came up with other pigment factoids:

Do auto insurance companies care which color you choose?

While many variables affect your auto insurance premiums -- your driving record, where you live, your marital status, the model car you drive -- the color of your vehicle is not considered by insurers when setting rates. We've sorted through the complexity and can tell you how car insurance rates work.

Some motorists assume driving a "Speed Racer" red vehicle will be considered more dangerous than a quieter white, resulting in higher insurance charges. Not so, according to CarInsurance.com consumer analyst Penny Gusner. (See: "What a crock! 10 lies people believe about car insurance.")

Insurance companies do not consider the color of your car when setting auto insurance rates, though about 25 percent of people surveyed said they think car color does affect cost, says Gusner.

"Many people have the misconception that red or silver cars cost more to insure than white or tan ones. This is not true," she says. What will be a factor in setting your premium is the type of vehicle you drive, as insurers take into account its safety features and theft-risk, among other things, but not the actual color of the vehicle.