Home / Auto Insurance / Who Pays For Your $500 Car Key?
See how much YOU can save 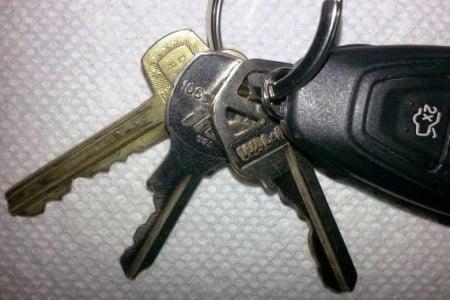 Simple metal car keys are going the way of the landline.

Over the past couple of decades, you may have graduated from a standard metal key to a key fob or car remote and onto a transponder, which has a chip that needs to be programmed before you start your car. If you own a luxury car equipped with high-tech features, you may have gone to the next level of door openers: a smart key, which is essentially not a key at all but a remote control device that you plug into your dashboard or even just leave in your pocket to start the car.

The days when any locksmith could cut you a new key for a few bucks are long over.

While high-tech devices may bring convenience, they are also costly.

"Generally, it costs $200 to $400 to replace a smart key on a luxury car, plus you have to factor in labor costs to program it, which can be $100 an hour," says Ronald Montoya, consumer advice editor for Edmunds.com, a supplier of car information, in Santa Monica, Calif.

Montoya says newer models of cars have laser-cut keys with built-in transponder chips that must be programmed by a dealer or by a qualified locksmith. It can cost $150 to $250 to replace a lost or stolen laser-cut key plus another $100 for programming.

"If you lose all the keys to your car, you may need to replace the locks, which could cost $1,000," says Montoya.

The inconvenience may rival the cost. A locksmith dispatched to unlock your car may be able to get you inside again, but he or she may not be able to reprogram all types of keys -- and that means a trip to the dealership on a flatbed truck.

Typically, if you simply lost your car keys, you'll have to pay to replace them yourself.

If you are somehow stranded or locked out of your car, your emergency road service coverage (only about 16 percent of drivers carry it through their insurance companies) would pay to get you back into your car or to tow it somewhere that's safe. But it usually won't pay to replace your keys.

Even if your comprehensive and collision policy covered a lost key, it's unlikely that it would make financial sense to file a claim.

"You need to remember that when you want to make a claim you'll have to pay your deductible," says Sandra Spann, a spokeswoman for American Family Insurance in Madison, Wisconsin. "Some people still have a relatively low deductible, but many have a deductible of $500 or $1,000 on their car insurance and home insurance policies. If your deductible is higher than the cost of your replacement keys, it makes sense to just pay for them yourself."

Spann says American Family Insurance covers smart keys -- or any other key replacements -- only if the keys are damaged in a covered loss, such as a vehicle fire. Comprehensive coverage pays to repair or replace your vehicle if it's stolen, vandalized or damaged by fire, hail or a flood.

"We don't cover the keys themselves, just the vehicle," she says. "If your keys got damaged from a fire or from a crash that damaged the steering column, then that would be a covered loss."

Absent optional physical damage coverage such as comprehensive or collision, MetLife would refer the customer to their homeowner policy to determine if coverage under their personal property protection exists, says Rick Ward, director of auto claims for MetLife Auto and Home in Providence, R.I.

So, for example, say your pocketbook or gym bag were stolen with your car key in it. "Theft is a named peril under the homeowner contract, so we would cover the replacement cost of the key as a piece of personal property. If the insured had comprehensive coverage under his or her auto policy, the theft of the key would also have been covered under that. In all cases, the losses would be subject to a deductible," says Ward.

Spann says consumers should check with their home insurance company to see if they have coverage for lost or stolen keys.