11 firsts that changed the way we drive The first Ford Model Ts had wooden wheels and hand-cranked engines, and it would take automakers years -- or even decades -- to upgrade such early models with heat, radios and other features that we take for granted today.

"The automobile's story has been one of a slow evolution of innovation," says Greg Wallace, General Motors' corporate historian. "The industry is one big running change (agent). We are constantly fine-tuning things."

And in safety, too. In 1921, before advances such as safety glass, crumple zones, seat belts and air bags, 24 drivers died for every 1 million miles driven. Today, that number is 1.11. (See "The best new-car safety features.")

Although historians don't always agree on when different inventions first appeared, the information that follows reflects the earliest usages documented by "Robertson's Book of Firsts," "Scholastic Book of Firsts," "Famous First Facts (U.S. and international editions)" and other credible sources. 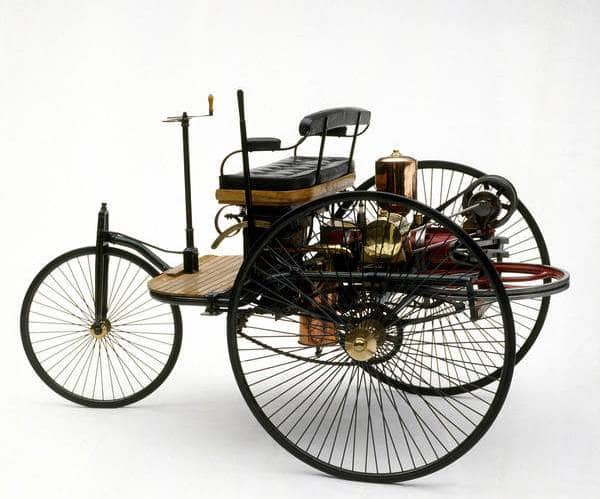 Many people think the 1908 Model T was the first automobile ever built, but it was merely the first mass-produced, affordable one (and some historians even bestow that title on a 1901 Olds).

The first device that many experts view as a "car" actually dates all the way back to 1769, when French inventor Nicolas-Joseph Cugnot developed a steam-powered tractor designed to haul artillery. Other historians put the automobile's invention year as 1862, when Paris engineer Etienne Lenoir built an early internal-combustion engine and hooked it to a horse carriage that he drove for 12 miles.

But most experts agree that the first commercially viable car premiered in 1885, when Germany's Karl Benz created a three-wheeler that resembled a big gas-powered tricycle. Benz would go on to co-found what is today's Mercedes-Benz brand. 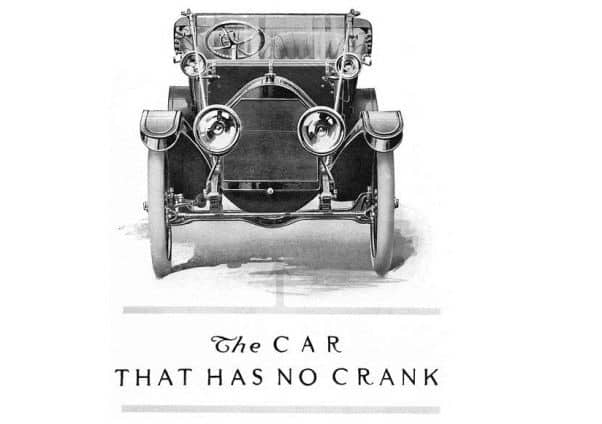 Drivers originally started cars by having someone turn a crankshaft for them on the vehicle's grille, but that took so much work that it apparently gave rise to the term "cranky" to describe how these helpers felt afterward. Crankshafts also occasionally snapped backward and broke a helper's hand, or worse.

The earliest documented car with an electric starter dates to 1896, when a British electrical engineer added one that he invented himself to his Arnold Motor Carriage. Belgian automaker Dechamps then began selling cars with electric starters in 1902.

In America, Cadillac founder Henry Leland decided to mass-produce cars with electric starters after one of his model's crankshafts snapped back and killed a friend in 1910. He hired inventor Charles Kettering, who had developed an electric cash register to replace hand-cranked ones, to apply similar technology to cars.

Leland put Kettering's starter in the 1912 Cadillac Touring Edition, a move that GM's Wallace calls "a game changer" because it made driving far more appealing to women. Making automobiles easier to start made them easier to steal, creating the need for car keys.

Early electric starters just had push buttons, but one Indiana automaker included a key-controlled ignition switch on a 1914 model called the Inter-State. Car-key ignitions came into wide use in 1949, when Chrysler added them to all of its cars.

Ironically, automakers have been going the other direction in recent years and replacing key-controlled ignitions with push-button ones on many models. But unlike the early systems, modern keyless ignitions won't start unless you to have a special key fob that sends a signal to the auto to prove that you're authorized to drive it. (See “Who pays to replace your lost keys?”) Jones developed the device after his wife asked while they were driving a steam-powered car he had built how fast they were going. When Jones admitted that he didn't know, she suggested he come up with a way to find out. He did so, patenting the speedometer in 1903 and reportedly making a fortune off of it.

Today, you ignore your speedometer at your own peril. (See “Ticket’s impact typically lasts 3 years.”) 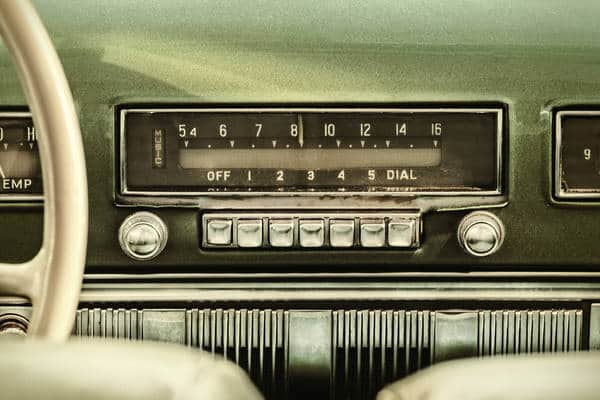 Car radios date back to 1922, when a Chicago teenager added one to a Model T. A few months later, German automaker Daimler and Marconiphone Co. displayed a radio-equipped limousine at a London auto show.

The first mass-produced car to offer a radio was a 1924 Rolls-Royce built by a U.S. subsidiary that listed a receiver as an option, although "Robertson's Book of Firsts" says it's possible no one actually ordered one. Author Patrick Robertson found that the earliest model to definitely come with a radio was the 1925 Summit, an Australian brand.

The first push to curb distracted driving soon followed, with a Massachusetts lawmaker unsuccessfully seeking to ban car radios in 1930. Czech automaker Nesselsdorfer Wagenbau-Fabriksgesellschaft added bumpers to its "Prasident" model in 1897, but they're said to have fallen off after a short trip. 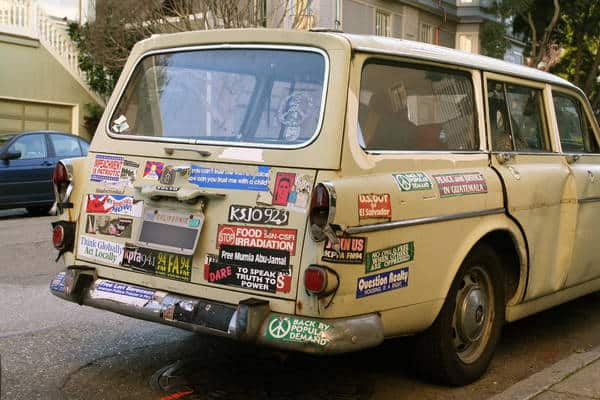 If you're going to have bumpers, you might as well have bumper stickers.

Election-related bumper stickers arose in the 1930s, with widespread use ahead of the 1952 presidential election. That's when a "Draft Eisenhower" movement began putting out "I Like Ike" stickers to urge World War II general (and future president) Dwight D. Eisenhower to run. Early cars either lacked roofs completely or came with what we now call soft-cloth convertible tops, giving drivers little or no protection from the cold.

Many car owners simply put their vehicles away each winter, while others bought special heavy clothes or used devices common for horse carriages -- kerosene lanterns, portable coal heaters or even bricks that you'd heat up at home.

The first heaters specifically designed for cars appeared in the after-market around 1907 and used a vehicle's exhaust for warmth.

Typically installed by plumbers, they'd use pipes to route exhaust gas through the car's cabin to give off heat. But these systems often leaked, smelled bad and even caused some asphyxiation deaths.

The earliest modern heating system appeared on some 1933 Fords. Using a heat exchanger, they safely transferred warmth from the car's exhaust to fresh air that came out of a dashboard vent.

Heating a car is nice, but nothing beats a well-air-conditioned car on a hot day.

When you drove the Packard at 60 miles an hour, the air conditioner had the same cooling capacity that 3,000 pounds of ice offered over a 24-hour period. New York inventor E.J. Claghorn received a patent in 1885 for a "safety belt," although his application pre-dated mass-produced cars and basically described the kind of device that repair people use today to hook themselves to telephone poles.

The first factory-installed car seat belts came from U.S. automaker Nash around 1949, although some researchers claim the now-closed firm didn't add them until as late as 1952.

The modern three-point seat belt (lap belt plus shoulder harness) first appeared in 1959 on the Volvo PV544 sold in Sweden and on cars the company exported to America beginning in 1963. Volvo engineer Nils Bohlin developed the three-point belt based in part on his earlier work on airplane ejector seats.

Today, it’s illegal in most places to drive without wearing a seatbelt. (See “10 things you used to do but now can’t.”) Several companies claim to have developed the first electronic-navigation systems for cars around 1981.

Rather than rely on positioning satellites (which only major militaries had access to in those days), the system used a gasoline-powered gyroscope to display a car's position as a dot on a small video display terminal. Users received a set of plastic-overlay maps to put over the screen to actually figure out where the dot said they were.