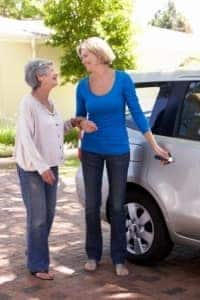 If you're helping out a relative or friend who can't drive, your to-do list probably looks endless. But here's one more thing you might not have thought to include: Ask about car insurance coverage.

Auto insurance is fairly straightforward in ordinary situations. A standard policy generally covers the car owner, drivers in the household who are listed on the policy and anyone else the owner lets use the car occasionally.

But it gets a little blurry outside the standard lines, especially for senior drivers. Here are four scenarios and how car insurance would come into play:

1. Your great aunt gives up her license, but maintains a car for you to drive her to appointments.

Usually the person insuring a car is a licensed driver.

"But there are some companies out there that will allow you to exclude yourself and name someone else as the primary driver on the policy," says Penny Gusner, consumer analyst for Insure.com.

In this case, your aunt would ask her insurer to exclude her and name you as the primary driver. The auto insurance company would use information about you, such as your age, gender and driving record, to help determine the premium for the policy. (See how each type of coverage works.)

Have your aunt call the car insurance company or agent she used before giving up her license. An insurer is more likely to accommodate special circumstances for a customer with a good track record with the company. Your aunt should also review liability limits to make sure they're adequate, Gusner says. As a senior on a fixed income, who probably didn't drive much even when she had a license, she may have lowered the limits to save money on car insurance.

2. Your sister is laid up for six months with a broken leg, so you move in and use her car to help out.

If you visit for a couple of weeks, then your sister's policy probably would extend coverage to you as a "permissive driver" -- someone she lets borrow her car occasionally.

"But if it's for 30 days or more, then you probably will need to be listed on the policy," Gusner says.

Insurance companies want information on all the licensed drivers who live in the household and have regular access to the car. Neglecting to tell the company about a driver who shares the household could create a sticky situation if that driver crashed the car.

Your sister should let her car insurance agent or company know that you're living with her. Once she's up and around again and you move out, she can remove you from the policy.

3. You make extra cash chauffeuring elderly neighbors to the store.

Ask your neighbors to check their own policies if you're using their cars.

4. Your grandmother asks you to drive her to a monthly bridge game.

In most cases your grandmother's policy would cover you as an occasional "permissive driver." Still it's a good idea to double-check coverage with the car insurance company.

"Some policies are more stringent than others about what 'occasional' drivers are," Gusner says.

And some include tricky exclusions. Cheap car insurance policies, for instance, sometimes exclude everyone but the named drivers, or they exclude permissive drivers under the age of 25. In some states, insurers are allowed to include "step-down provisions" in their policies, which reduce the policy's liability limits to the state-minimum requirements when permissive drivers are using the car. These types of limitations are more common with nonstandard, inexpensive policies.

"Your best bet is definitely to call and clarify coverage with your insurance company," Gusner says.