Home / Auto Insurance / When Will Cars Drive Themselves?
See how much YOU can save

When will cars drive themselves? 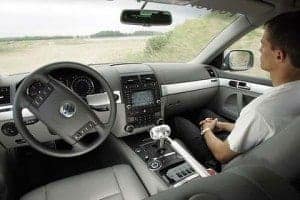 M City sounds like something out of a Bond film, but it’s being built right now and soon it will be crawling with driverless cars and robot pedestrians.

The 32-acre facility will open this summer at the University of Michigan's Mobility Transformation Center, testing the latest in autonomous technology as well as vehicle-to-vehicle (V2V) and vehicle-to-infrastructure (V2I) communications.

Proving autonomous technology is safe, without any blood loss, is the goal.

The stakes are high.

A report from McKinsey & Co. estimates that widespread adoption of autonomous cars would reduce accidents by 90 percent, which would drop property damage and medical costs by $190 billion a year. The report predicts that as accidents drop off, rates for insuring new cars will drop dramatically, with insurers shifting their focus from driver-induced accidents to technical failures.

Are we there yet? Nope

"M City will allow us to test emerging technologies and systems at a safe, off-roadway site to evaluate effectiveness and reliability," says David R. Lampe with the University of Michigan Office of Research.

While M City will be hosting technology that may not hit mainstream cars for decades, automakers will also be testing the semi-autonomous systems that might let you take your hands off the wheel (in certain situations) in the very near future.

But how different are fully autonomous cars from the technology that is reaching showrooms now?

The answer varies depending on whom you ask, as does the timeline for a fully autonomous production car. But pretty much everyone agrees that the future of transportation will be altered forever once the change occurs.

Cheaper car insurance will be just one part of it. When autonomous cars hit the road, the entire driving experience will be dramatically different from anything that preceded it.

How autonomous is your car? A scale

When it comes to driverless cars, the National Highway Traffic Safety Administration (NHTSA) likes to use a five-stage system to map out the future:

No automation (Level 0): The driver is in complete and sole control of the primary vehicle controls – brake, steering and throttle – at all times.

Function-specific automation (Level 1): Automation at this level involves one or more specific control functions. Examples include electronic stability control or assisted braking, where computers enable the driver to regain control of the vehicle or stop faster than otherwise possible.

Combined function automation (Level 2): This level involves automation of at least two primary control functions designed to work in unison to relieve the driver of control of those functions. An example is adaptive cruise control in combination with lane centering.

Limited self-driving automation (Level 3): Vehicles at this level of automation enable the driver to cede full control of all safety-critical functions under certain traffic or environmental conditions. The driver is expected to be available for occasional control, but with sufficiently comfortable transition time. The current Google car is an example of limited self-driving automation.

Full self-driving automation (Level 4): The vehicle is designed to perform all safety-critical driving functions and monitor roadway conditions for an entire trip. Such a design anticipates that the driver will provide destination or navigation input, but is not expected to be available for control at any time during the trip. This includes both occupied and unoccupied vehicles.

Some currently available vehicles are approaching Level 3, where technology at times will take full control in certain conditions but a driver must be available to take over if needed. Those "certain conditions" are usually highway driving, which is much easier to master than tooling around a big city.

The state of autonomous cars

Recently, an Audi A7 drove itself from California to Las Vegas for the 2015 Consumer Electronics Show. The car covered 550 miles, switching lanes and passing slower vehicles all by itself.

Does that mean the technology is ready for prime time?

Just about every expert in the field says not yet. Most speculate that it will be a couple of decades before we will experience a coffee-sipping, book-reading commute and insurance premiums that are a fraction of what we currently pay – if we own a private car at all.

So what are the differences between the test cars cruising M City and the latest semi-autonomous offering from Mercedes? (See “The best new-car safety features.”)

Technology: Fully autonomous cars are seriously high-tech. "One technology that allows for advanced autonomy is a big spinning LIDAR (laser-based distance measuring system) array atop the vehicle," says Joe Wiesenfelder, executive editor at Cars.com. "The precision of these things lends confidence, but we're a long way before they're affordable for use in normal cars," says Wiesenfelder.

The Audi that drove to CES was equipped with six radars, three cameras and two LIDAR units.

Cost: The technology is way out of the typical driver’s budget. The Google cars have been estimated to have $150,000 worth of high-tech gear on board.

According to Kelley Blue Book, the average cost of a new car hit $33,500 in April. Even if automakers manage to get the additional cost of autonomous technology down to $10,000, which some experts predict will happen, it's still a pretty expensive add-on.

The brains: Safely navigating all of the situations that come up on a typical city drive is extremely complicated  -- and even the most sophisticated autonomous vehicles are not yet up for the challenge.

"There are no current examples in which software makes life-or-death decisions, but for fully automated driving that will be happening," says Steven Shladover, a research engineer at University of California Berkeley.

"In order for a fully automated vehicle to be as safe as today's driving, it will have to drive at least 65,000 hours without a failure serious enough to produce an injury and over 3.3 million hours without a fatal error. Compare those numbers with the failure rates on PC software or mobile phones to see how far away we are," he says.

The problems are so complex that Shladover predicts it will be at least 50 years before we see an autonomous car that can drive under all conditions a human can.

They talk to other cars: Autonomous cars will talk to other cars via wireless communication, sharing their position, direction and speed with other vehicles as well as surrounding infrastructure. All of this data can warn the car of unseen dangers.

"A car can be fully autonomous with collision avoidance features, but that won't necessarily prevent a collision if another car comes speeding into an intersection, against the traffic signal. But if the car knows the other car is coming, that's a different matter," says Wiesenfelder.

How automakers see the future

Predictions from automakers are all over the place when it comes to hands-free highway cruising: