7 reasons to use a dashboard camera 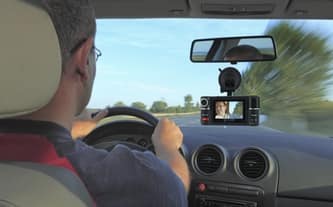 A dash board camera can help you if another driver rams into your vehicle. A camera can also help you with car insurance.

Dash cams start well under $100. Most record hours of video in a continuous loop, with recent video replacing older footage when you start the car. Fancier cameras can record even when the car is off – triggered by motion sensors – or come with GPS sensors that overlay the time, speed and location. Some offer two-way video of the road ahead and of the driver and passengers inside the car.

While merely owning a dash cam may not lower your car insurance rates, the footage that the camera provides may turn out invaluable in certain situations.

Here are seven reasons why you may want a dash camera:

1. Have a record of your accident

Drivers often have completely different memories and descriptions of an accident. With video proof that you weren’t the driver responsible for a car crash, you can save yourself from being found at fault by a car insurance company -- and receiving higher auto insurance rates that go with that finding.

Your dash cam footage can also expedite your claim, as it may prevent you from having drawn-out discussions with insurance companies about who was at fault.

If you’re stopped for a traffic violation you didn’t commit, offer up your dash cam footage to the law enforcement officer before the ticket is written. If the officer won’t watch it, bring the footage to court to contest the ticket.

Moving traffic violations will normally give you points on your state driving record and raise your car insurance rates. Not receiving a ticket -- or beating a ticket in court due to video proof of no wrongdoing – will keep you from a nasty auto insurance surcharge.

In New York, a two-way dash cam saved a driver from receiving a ticket for using his cellphone while driving. The officer let the driver go without a ticket after viewing dash cam footage showing the motorist wasn’t talking on his phone, but merely scratching and tugging on his ear.

If you have a feeling the accident you were in, or just witnessed, may have been a “crash for cash,” turn over your dash cam footage to the insurance companies involved, or to the state insurance fraud unit, to investigate.  Catching a fraudster in a staged accident, can indirectly lower your rates.

When auto insurers unknowingly settle fraudulent claims, all motorists pay hundreds of dollars extra each year because companies divide the cost of claims among consumers.

4.  Make you a better driver

Dancers look in the mirror to correct their technique, athletes watch video of their previous games to improve their play and you can review your daily driving footage to become a better driver. Reviewing how you drove in the last week can help you see ways to correct driving mistakes, such as braking too hard or switching lanes abruptly.

Drivers under the age of 25 have some of the highest car insurance rates. Insurers charge them higher rates because of their lack of experience behind the wheel and tendency to crash and cause claims. Anything you can do to keep your young driver from getting in an accident or from getting a ticket -- either of which is bound to raise your already high rates into the stratosphere -- is well worth the effort.

Set up a regular time to review the dash cam footage and see what your child can do better and take your teen out to practice those skills. “A teen’s first month behind the wheel is many times more dangerous than his sixth,” says Insurance.com Editorial Director Michelle Megna. “Whatever you can do to make those first few miles safe is critical.”

A two-way dash cam or multiple dash cameras for a teen could be a good idea. That way, you can see not only how your teen is driving but what is going on inside of the vehicle. Is your teenager paying attention to the road or instead is he texting, on his cellphone or distracted by passengers?  You can curtail bad behavior inside the car before it leads to an accident or ticket.

Video is an integral part of American Family Insurance’s TeenSafe Driver Program, which allows parents to see events that triggered erratic or abrupt moves on the road.

Keeping a driving record clean will lead to your child to receive a good driver discount quicker (typically you must have a license with a clean record for at least three years to be eligible). There are many ways to lower your teen or young drivers insurance.

6.  Have an eye on your unattended vehicle

Most dash cameras have an option that allows you to turn it on standby that permits the camera only to turn on if it feels motion in or around the car.  So, if someone breaks into your car or hits your parked car and takes off, you may be able to review the dash cam footage and find the individual responsible.

If you can’t find the person on your own, then you can hand the footage over to your insurance company to prove how the damage was done (again might keep your rates low by keeping you from being found at fault for an incident) and also to the police to see if the culprit can be located and held accountable.

You may not catch something as astonishing as meteors raining down like Russian dash cam owners captured a few years back; however, you may catch a deer darting out in the road causing your accident, a rock slide that damages your car or neighbor’s tree that falls on your car during a storm.

With that footage in hand, you can show your car insurance company what brought about your claim and may save yourself from a surcharge.