Home / Auto Insurance / Distracted, Discourteous And Dangerous: Drivers Confess To Bad Behavior
See how much YOU can save 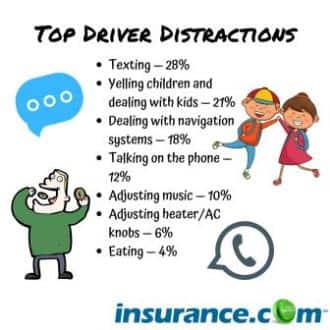 Most drivers understand that distracted driving is dangerous, but many of those same people admit to texting, eating, and talking of their cellphones while driving.

They also confess to rude driving behavior. Chief among motorist misdeeds are honking, brake-checking other drivers and, even with their children in the car, flipping off and swearing at fellow motorists, with more women than men doing so.

Insurance.com commissioned Op4G to survey 1,000 motorists about their driving habits. Drivers were asked about what types of distracted behavior they engage in, their opinion on its severity and if they admit to rude or dangerous driving maneuvers.

What distracts drivers most?

We found that respondents ranked talking on a cellphone as the most severe driving distraction. That was followed closely by fiddling with music players, GPS, and other electronic devices/features. Texting finished third and closely edged out children’s activities in the car.

When it comes to what actually distracts drivers the most, respondents blamed texting and children.

“It’s not just outside tech like a cellphone that can distract drivers but people and equipment in the vehicle,” notes Penny Gusner, consumer analyst for Insurance.com. “To keep car insurance rates down, drivers need to be accident free, so set yourself up for success on the road is my recommendation. Put your phone on ‘do not disturb,’ plot your destination and look at the route on the navigation system and give the kids something to do all before you put your vehicle in drive.”

Drivers know texting is dangerous, but do it anyway

We found that drivers know distracted driving, such as texting, is a problem.

A whopping 90 percent of people surveyed acknowledged that texting and driving is as dangerous as driving under the influence. However, 40 percent still admitted that they’ve texted while driving. Nearly the same percentage of men and women text and drive, 39 percent of women surveyed, compared to 42 percent of men.

Three percent texted for work purposes. Two percent said they texted to say hello or because they were bored. Another type of dangerous distracted driving is taking a selfie. The good news is that 88 percent of respondents said they’ve never done that.

Photos and videos: Poetry in motion?

We also found that 27 percent of people said they’ve taken a photo or video while driving.

Taking photos and videos while driving broke down pretty evenly among men and women with one exception – 23 percent of men did it to share some humor or social punditry, compared to just 10 percent of women.

One driver wrote in that the reason for taking the photo or video while behind the wheel was because “I saw a friend’s car at a place it should not have been.” Others had less scandalous reasons and wanted to document mileage milestones, capture road signs or share a show of them singing to their favorite song on the radio.

Distracted driving while using a mobile device involves more than taking selfies and photos. The survey found that 17 percent read an email or checked social media. Ten percent said they watched a video clip and 9 percent admitted to writing an email.

he issue is a larger concern. Plus, it’s not just slightly more disconcerting. More than two-thirds of people who said distracted driving is a bigger issue said it’s at least 50 percent bigger than only two years ago. Drivers confess to rude and dangerous moves behind the wheel

Besides distracted driving, our survey also asked a question about their behavior while driving. We found that people were willing to tell us about their questionable behavior.

Insurance.com six years ago commissioned a survey of 1,000 parents asking them about their bad driving habits, and asked the same questions again this year. There were only minor changes in the findings when comparing 2013 to 2019, which means while bad motorist behavior isn’t getting significantly worse, it’s also not improving much, either, according to the survey analysis.

Only 19 percent said they’ve never done any of those things while driving. So, not only did drivers admit they took part in distracted driving, but many acknowledged they aren’t always the most polite drivers either.

You can also wind up paying more for car insurance if you are cited for a moving violation, such as speeding, tailgating, careless or reckless driving or failing to stop. The increase to your rate for common traffic tickets can be up to 30 percent, on average, and twice that for reckless driving.

How much car insurance rates go up for distracted driving

Distracted driving doesn’t just lead to accidents. You can also get a ticket and wind up paying higher auto insurance rates.

Texting tickets increase your auto insurance rates an average of 23 percent. That’s $346, on average, across the U.S. It’s even higher in places like California, Ohio, Indiana, New Hampshire and Rhode Island. California’s average auto insurance rate increase is 45 percent for a texting ticket. The other above states increase an average of 34 percent, according to rates Insurance.com received from Quadrant Information Services. One at-fault accident on your record can hike your rates by about 32 percent, a distracted driving ticket, by 22 percent.

Some states, including Washington, forbid eating and putting on makeup while driving. Even if a state doesn’t specifically ban these driving practices, you could still get a ticket for distracted or reckless driving.

So, even though people are increasingly aware of the problem of distracted driving, the issue is actually getting worse.

"The bottom line is drivers that are being distracted, discourteous or outright dangerous need to recognize this behavior and change or they are likely to end up in an accident or receiving a ticket," says Gusner.  "Either of those will adversely affect your car insurance rates for the next three to five years, so a long time for you to pay for your  actions as a driver."