Home / Auto Insurance / Texting Tickets And Car Insurance: How Much Does Your Insurance Go Up?
See how much YOU can save

Texting tickets and car insurance: How much does your insurance go up? 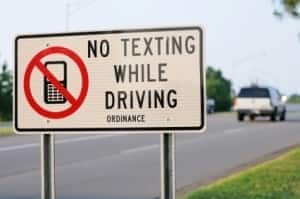 There are few places in this country where you won't get busted for texting while behind the wheel. Currently, 48 states and Washington, D.C., have outlawed texting for all drivers, according to the Governors Highway Safety Association.

The average percentage rate increase after a texting ticket is 23%, but could be as low as 12% and as high as 45%, based on a survey of six insurance carriers in 10 ZIP codes in every state, commissioned by Insurance.com. That doesn’t mean all carriers raise your rates, though.

“If you live in a state that treats a texting ticket as a moving violation, it’s treated by insurance companies like any other minor ticket,” says Michelle Megna, editorial director of Insurance.com. “But there’s a big difference in how individual companies handle tickets. With some, a single ticket might not affect your rates at all. Others might decide you don’t qualify for a good driver discount anymore. And some might actually raise your rates quite a bit.”

And, in some states, it's illegal for car insurance companies to hike your rate for a texting ticket conviction. In Idaho and North Carolina, state laws prohibit insurers from raising rates based on texting violations.

How much does car insurance go up after a texting ticket? Increases by state

*Methodology: Insurance.com commissioned Quadrant Information Services to field rates from up to six major insurers in 10 ZIP codes in every state for a driver of a 2017 Honda Accord, age 40, with good credit and full coverage and $500 deductible; increases shown are an average from the base rate.

Beyond a fine and an insurance increase, a texting ticket adds points to your driving record in some states. That's important because you could lose your license if you rack up too many. In California, for instance, four points in a 12-month period gets you a six-month license suspension and year-long probation.

Points affect car insurance. If they show up in a review of your driving record, they'll probably lead to a rate hike, especially if you have other infractions or have been in a recent accident.

You'll see in the chart below which states ban cellphones while driving -- unless you use a hands-free accessory -- and which have laws against texting and driving, as well as how those laws are enforced and if the penalty carries license points.