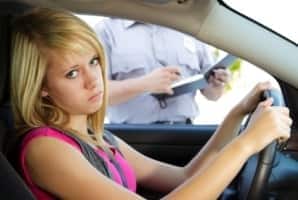 If you get a ticket, you'll also likely get a car insurance premium surcharge when you renew.

A surcharge is a fee added to your premium that can be equated to “a penalty for something that the driver did,” says Lynne McChristian, the Florida representative for the Insurance Information Institute.

McChristian says examples of behavior that can lead to surcharges include:

How much that surcharge costs, how long you will be required to pay it and whether the surcharge decreases over time depends on your insurance company's policies and your state's laws.

Typically, a surcharge remains in place for between three and 10 years, McChristian says.

Bryan Cook, a Whitinsville, MA-based senior assistant vice president with Amica Mutual Insurance Co., says that how long an infraction stays on your driving record doesn't impact the length of time you must pay a surcharge.

While insurance companies must comply with state laws governing car insurance rates, Cook says Amica generally adds a surcharge for a ticket for three years after the ticket was issued.

When does the penalty period start, how long does it last?

John Foster, vice president of underwriting operations at Penn National Insurance in Harrisburg, PA, says the start of that three-year period may be based upon the date of occurrence or conviction. State law often determines it.

“It is also worth noting that some state laws -- for example, Pennsylvania -- do not permit surcharges for minor violations and only allow them for major traffic offenses,” Foster says.

While state laws may govern whether a surcharge can be applied and how long it might last, every insurance company assigns its own dollar value for that violation, and then adds it to your premium.

From carrier to carrier, the differences can be huge. Some companies might not choose to penalize you for a small offense, even if state law allows it.

For example, McChristian notes that some insurance companies give a “free pass” to a long-time policyholder who maintained a good driving record prior to a minor traffic infraction.

"In this case, you wouldn’t see a rate increase at all," she says.

Other companies may place a surcharge that lasts for just one year. "Then, that charge drops off if nothing else appears on your record," McChristian says.

For example, according to data gathered by Quadrant Information Services for Insurance.com, here's what happens after a single speeding ticket for 16 to 29 mph over the limit with six major carriers for 40-year-old man buying full coverage on a new Honda Accord:

You'll see that the car insurance increase for a ticket, in this case speeding, varies significantly among carriers.

Stack up a few tickets and you run the risk needing high-risk auto insurance.

What is the difference between a premium surcharge and a rate hike?

Insurance lingo can be a bit confusing. Some people are confused about the difference between a “premium surcharge” and a “rate hike.”

McChristian says an insurer will levy a surcharge upon a policyholder as a type of penalty after a moving violation or other bad behavior.

By contrast, a rate hike can be more general.

“The rate hike may be something that is ‘across the board,’ for all policyholders,” McChristian says.

She emphasizes “may be” because there are many other potential sources of a rate hike that would only affect an individual policyholder, including:

“Points” is another term that might confuse some policyholders. When considering how insurers hike rates, don’t confuse your state’s “point” system with an insurance company’s system.

Like state motor vehicle departments, insurance companies use point systems to track your driving behavior. But the two systems differ.

DMV points are assessed if you are convicted of certain traffic violations. Rack up too many points and your license can be suspended or revoked.

By contrast, insurers have their own point system that helps them determine when to raise your rate -- and by how much. In some states, regulators set up the point system used by insurers.

Shopping for new auto insurance with a ticket on your record

If you decide to shop for a new auto insurance policy during the period of the surcharge, your new car insurance company will apply a surcharge to your premiums until the surcharge period ends, in accordance with state regulations.

Foster says that the surcharge period will be based on when the violation occurred, so that if you switch insurance companies two years after a ticket was issued, your new company can only apply a surcharge for one year. After that, you will return to regular auto insurance premiums. However, depending on the severity of your driving infraction, you may have trouble acquiring new car insurance.

"While surcharges are generally limited to only a three-year period, some carriers may evaluate tickets on your driving record beyond three years -- especially major convictions -- when determining new applicant eligibility or acceptance," says Foster. "For instance, while companies may not surcharge a person for a ticket four years ago, they may decline or refuse to accept a new applicant for that traffic ticket."

There are ways to save on car insurance, despite a less-than-perfect driving record.