Car insurance with a suspended license

If your license gets suspended or revoked, can someone else drive your insured vehicle or do you lose your car insurance, too?

The answer is maybe not today, maybe not tomorrow, but soon -- and at least until you can show you're getting your license back.

States, which regulate much of how insurance companies operate, don't allow insurers to cancel a customer's policy in the middle of a policy term without a very good reason. Those reasons are typically limited to issues of nonpayment, fraud and misrepresentation.

"There are only certain states where they allow midterm cancellation due to your license being suspended or revoked," says Penny Gusner, senior consumer analyst with Insure.com. "What you have going for you, even in those states, is that insurance companies don't usually run your driving record in the middle of your policy term."

So if my policy is midterm, I'm still covered?

Increasingly, insurers are inserting language into policies' fine print to address the problem of suspended drivers getting behind the wheel.

The language typically goes something like this: If you have failed to report within 60 days that a member of your household has had his or her license suspended or revoked, that driver would not be covered by your policy.

"Insurance companies are seeing some of the problems they're encountering and they're throwing in different exclusions as to who can drive the car, trying to control the unusual cases," says Glenn Tippy, president of the Professional Insurance Agents of New Jersey.

You could wind you getting fined, having your car impounded and even go to jail for driving with a suspended license. You'll also have to hundreds or even thousands more for your next car insurance policy.

You will almost certainly face an SR-22 requirement – an insurance company’s guarantee to your state that you have the required insurance coverage in place – when you get your driver’s license back. You will pay much higher car insurance rates because of the offense that triggered the suspension and the SR-22 filing.

The only good news is that you have far more to gain by shopping around for coverage when you go to get insured again.

Why would a suspended driver be covered?

State regulators don't want insurance companies to automatically cancel an auto policy, even if a driver has lost his license.

That's because while one driver may make a mistake, often other drivers use the same car. Those other drivers would have no way of knowing about the license suspension.

"The basic rule for personal auto policies is: Insurance follows the car," says Tippy. "You have a contract, and it follows the car. Because people don't have perfect knowledge, insurance companies are constrained in how quickly they can take action and what presumptions they can make."

What happens to my insurance if my license is suspended? 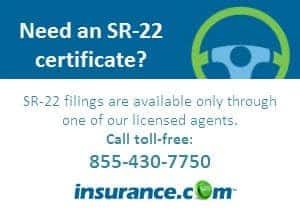 Eventually, you will lose your auto insurance.

If you are in the middle of your policy term, and your policy does not contain an exclusionary clause for driver suspensions, you likely will remain covered until the end of your term.

Keep in mind, though, that the rules are different if you're a new customer. In that case, an insurance company gets a certain amount of time -- typically from 30 to 90 days -- to conduct a background check and cancel your policy. Having an invalid license would certainly mark you as high risk and your policy would be canceled.

If you're an existing customer, the insurer can decide not to renew your policy for virtually any reason. This is different from a cancellation.

The renewal date is also when the insurance company is more likely to run your name through motor vehicle records and other informational databases. If that check reveals your driver's license has been suspended or revoked, you can bet the insurer is not going to renew your policy.

In all of these scenarios, the insurance company is required to send you a notice informing you that your coverage is to be suspended at some future date, typically at least 30 days out. Insurers cannot backdate a cancellation, even if you had lost your license earlier.

What happens to my car if I don’t have a license?

If your suspension is short and your license will be reinstated by your next policy renewal, you may be able to simply park the car for the duration of the suspension.

If your suspension is longer, you have some choices to make. Insurance companies calculate rates based on the record of a licensed driver. If you don’t have a license -- or at least an imminent reinstatement -- you can’t get an insurance policy.

A registered car is required to have liability insurance in every state except New Hampshire. And if you are still making payments on the vehicle, your lender will require that you keep collision and comprehensive coverage on it as well.

One option, if you are still making car payments, is to find an insurance company that will allow you to designate another driver as the primary operator and exclude yourself from coverage. Not every company will do this, Gusner says, but many will.

If you own your car outright, your other option if you lack insurance is to park the car and turn in your license plates.

What if I don’t own the car I drive?

Take, for example, a young driver who gets a ticket and temporarily loses his license, yet neglects to tell his parents. The parents would continue to be covered on the auto insurance policy, even if it contains the above exclusion for known suspended drivers.

"If you don't know, and your kid doesn't tell you, then your 60 days hasn't started," says Tippy. "If there's ambiguity, if there's a lawsuit, it will be construed against the maker of the policy, which is the insurance company."

In other words, the insurance company would have to prove that whoever was driving -- a parent, a neighbor, a friend, a roommate -- knew about the license suspension and still didn't contact the company within 60 days.