DUI insurance -- how much more you'll pay after a conviction

We won’t address the “everything else” in your life, but we will alleviate your concerns and guide you through the process with regards to car insurance. We’ll show you how to get the cheapest DUI insurance, quotes from multiple top carriers, and lessen some of your concerns along the way. 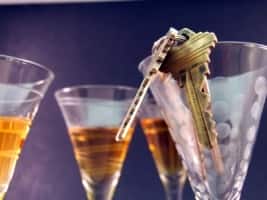 You’re only minutes away from being more informed about your insurance options and ready to shop for car insurance, so let’s get started.

How to get cheap DUI insurance

Car insurance after a DUI can be expensive, so you'll need to compare auto insurance quotes from multiple carriers to evaluate which companies offer the best DUI rates.

The impact of a DUI on insurance rates varies greatly depending on the company. We offer proof of this below and it's the reason we suggest comparing quotes from multiple carriers.

If you find that your current company isn't offering you the best rate, it's time to switch car insurance companies. Switching is easy enough and will require you to cancel your current policy. We can guide you through both.

Many companies offer DUI car insurance, but the rates they offer differ widely.

DUI rates will differ by many factors, including the state where you reside (see our "DUI rates by state" table below). There really isn't a "best" company when it comes to DUI. You'll have to shop around.

You'll see in the chart below that rates for a first-offense DUI vary among companies. Insurance.com's analysis shows that State Farm offers the cheapest DUI car insurance rates, on average. The difference between the cheapest DUI average rate from State Farm ($1,633) and the most expensive from Nationwide ($3,563) is nearly $2,000. So, even with this major citation, you can still save quite a bit by comparing car insurance quotes.

Note: The table shows the average annual rate of 10 ZIP codes in the state. Data was provided for Insurance.com by Quadrant Information Services.

A survey commissioned by Insurance.com of 1,000 drivers showed that the majority of motorists don't realize that you can save money by comparing rates after a major violation. Fifty-five percent of those surveyed said it was better to stick with your current insurer after a DUI, leaving 45% correctly answering that you should shop around.

As you can see in the table above, you can wind up paying -- or saving --  depending on the company you choose.

The cost can be expensive, ranging from an average premium increase of 28% to 371% depending on your state.

Check out how much your rate may be affected in your state by viewing the "DUI rates by state" table below.

The increase in insurance cost is largely due to the increase in risk you pose. That goes not only for DUIs, but other violations and infractions that place drivers in the high-risk auto insurance category.

Non-owner SR-22 insurance is a great way to get cheap insurance rates if you have a DUI, need to file an SR-22 and don't own a vehicle.

The reduction in price is because you don't have "regular access to a car" and you will only carry liability insurance coverage. Liability coverage is cheap because it only covers the injuries or property damage you cause in an at-fault accident, not the vehicle you are driving.

Also, a non-owners policy is a great way to keep continuous insurance coverage, which is an important factor in receiving lower rates in the future.

The SR-22 and FR-44 are certificates of financial responsibility that many states require when you reinstate your driver's license after a DUI. These certificates aren't limited to just alcohol-related driving offenses. They are also related to DWIs and OUIs. Your insurance company must file these certificates with the DMV on your behalf.

How long does a DUI affect insurance?

Insurance company guidelines, governed by state laws, dictate how long your rates will be affected by a DUI conviction. As with most minor or major convictions, a DUI will raise your car insurance rates for three years.

If your state keeps the offense on your record longer than three years, and many do, it's common for this offense to affect your car insurance rates for five to seven years or more. For instance, in California, a DUI prevents you from receiving a 20% safe-driver discount for 10 years from the date of your DUI conviction.

Here are the average car insurance rates and rate increases by state:

Methodology: Insurance.com commissioned Quadrant Information Services to field quotes from up to six major insurers for 10 ZIP codes in each state for a 2017 Honda Accord operated by male, age 40. Base rate is for $100,000 per person in bodily injury liability, up to $300,000 per accident, and $300,000 property damage liability limits; comprehensive and collision coverage with a $500 deductible.

2  Michigan has administrative license suspension for for refusal to submit to chemical test.

4  South Dakota has administrative license suspension for 30 days for refusal to submit to chemical test.