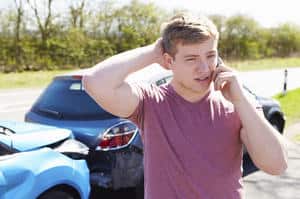 Most of us will call our insurance agents if we're involved in a major accident and the damages are measured in the tens of thousands of dollars.

But what about a little tangle with a concrete pillar?

When you're already carrying a $500 deductible on your collision coverage -- by far the most common -- does making a claim for $700 in damage make sense? How about $1,000?

There's a name for that gray area between your actual deductible and the amount at which you would automatically file a claim: the "pseudo-deductible."

Insurers use programs like accident forgiveness and vanishing deductibles not only to attract new customers and reward long term ones, but to make you think twice before submitting a claim.

So, should you fork over the money or call your insurance company?

To claim or not to claim

It almost goes without saying, but if you were in a minor accident and the claim amount is barely above your deductible, pay out of pocket. Making a claim will result in negligible savings and any rate increase (usually for the next three years) will put you on the losing end of the deal.

But how small is too small? Gusner suggests paying out of pocket for anything under $2,000 if you can afford it.

Do insurance costs go up after an accident claim?

In most cases, yes. Filing a claim for an at-fault accident means you're a higher risk to the company and are costing them money.

They will raise rates to recover the cost. Insurance.com's online quote comparison tool illustrates why you should compare car insurance quotes after a claim. Carriers charge more after a single, very small claim.

Looking at full-coverage quotes from three major carriers for a single, 40-year-old woman in Ashland, Ohio, driving a 2013 Buick Lacrosse, rates rise as much for a $100 claim as they do for much larger ones at some companies:

The increases after an accident aren't exactly random. They're math.

Your premium can rise in three different ways: You can pay an accident surcharge, your base rates could rise, or you could lose the discounts that cut your bill.

Insurance carriers have surcharge schedules that specify exactly when rates go up and why. However, every company has its own -- and even that may differ because of state laws.

"An insurance company with the cheapest rate may have the most expensive penalty, in the form of surcharges, for accidents," Gusner notes. "It's wise to request your insurer's surcharge schedule so you know what could happen with your rates."

Some companies may not surcharge a first accident or an accident where the damage is less than a certain amount. Even so, you may see an increase in your base rates because you have been moved to a riskier tier of drivers.

"In many states, insurers put drivers into buckets and base their rates on the group as a whole," says Gusner. "If they move you to a more claims-prone crowd, you'll pay more."

Last, policies vary, but in many cases you will lose your safe driver discount. Losing that discount will increase your premium even if there has been no surcharge or increase in the base rates.

In almost all cases, the rate increase is going to stay in effect for at least three years.

Accidents forgiven but not forgotten

The particulars of accident forgiveness vary by insurer. It might be free to drivers who qualify or you may have to upgrade to a premium policy. Certain insurers will add it to your policy immediately, while others require an accident-free record for a number of years. In some cases, a simple speeding ticket will disqualify you.

Some insurers allow drivers to cash in on accident forgiveness more than once, but it usually comes at a price.

Allstate offers accident forgiveness as an "add-on" to your car insurance policy. Thus, to have the coverage, you'll pay a higher premium.

Forgiveness doesn't mean the accident never happened. The incident still appears on your claims report. And accident forgiveness isn't portable: If you decide to switch insurers, the accident will be used when calculating your premium with the new company.

Once you cash in your accident forgiveness chip on a claim, you will usually need three to five years of accident-free driving to get it back, says Gusner.

Think twice before you file

Leaving a little money on the table to preserve low future rates isn't a luxury everyone can afford. But wherever you draw the line for your pseudo-deductible, it's not about getting your money's worth.

"Auto insurance is meant to help avert financial disaster," says Insurance.Com Editorial Director Michelle Megna. "If this means filing a claim, so be it. But don't file a claim just because you can."