Home / Home & Renters Insurance / Hail Damage And Home Insurance Coverage: What You Need To Know
See how much YOU can save

Hail damage and home insurance coverage: What you need to know 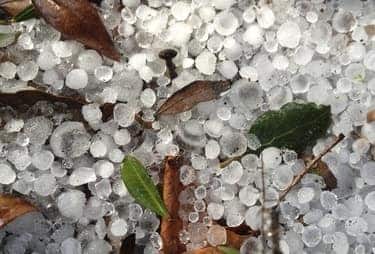 We'll also list states most prone to hail damage, and which are most likely to have special methods for hail coverage and claims.

Hail can strike with damaging force in many states. Texas, Kansas, and Illinois are likely to be hit the worst, according to a recent nationwide study.

That's the thrust of "Hail: The Hidden Risk," a report by Verisk. The analytics firm, which provides data for insurance and financial companies, found that more than 1.3 million properties (including homes) in Texas were damaged by hail in 2017, which put the state at the top of list. Illinois was second with nearly 900,000 buildings damaged.

Kansas had fewer properties damaged (about a half million), but a higher percentage (57 percent) off all homes and buildings in the state being affected by hail storms. Oklahoma had 55 percent of all buildings affected, with nearly 650,000 properties damaged.

The study also points out that while hail is more common in the highlighted states, hail can fall in many more states, or at least a portion of them. This underscores the need to make sure your hail damage insurance coverage is up-to-date, according to Verisk and various insurance experts.

When to file a hail damage claim

Most standard policies require filing a claim within one year of determining that a hail storm damaged your roof or other parts of the house. Michael Barry, an III spokesman, recommends contacting your agent or insurer to ensure you know the time limit for any claims.

In many states, usually where hail is less frequent, a standard homeowners policy includes hail damage as part of your protection coverage. Homeowners file a claim, pay the policy deductible, and then the insurer pays to fix the damage. A deductible is the amount you have to pay toward a loss before your insurance company pays a claim.

When deciding whether to file a claim, you should always be sure that the amount of the insurance pay out exceeds your deductible by enough money to make financial sense. For instance, if your house sustains $2,000 worth of damage and your deductible is $1,000, it might not be prudent to file a claim. That's because filing a claim may raise your rates. So, in the long run, you would pay more for filing a claim than just paying for the damage out of pocket.

Not in all cases. Since weather damage isn’t caused by your negligence, your insurer typically won’t hike your rate. However, your rate may increase if you’ve filed a claim within the three previous years, and the hail claim is your second.

Also, while your individual rate may not go up, if you live in an area prone to hail damage, the insurance company may charge everyone in that vicinity a higher base rate compared to places where hail is infrequent. Finally, some states, including Texas, prohibit home insurers from raising rates after just one claim, so it also depends on your state laws.

Hail claims have percent-based deductibles in some states

Following Hurricane Katrina in 2005, insurers decided that homeowners in states susceptible to hurricane and wind damage (which includes hail) needed to pay more for protection.

Typically, he says, the deductibles range from 1 to 5 percent of the home's insured value, depending on where the home is located and the historic storm and hail damage in the region.

"In some states, policyholders may have the option of paying a higher premium in return for a traditional dollar deductible," according to the III."In some high-risk coastal areas, insurers may not give policyholders this option, making the percentage deductible mandatory."

Again, Barry says homeowners need to discuss their situation with their insurer to know exactly how much coverage they should consider and how much it will cost.

Make sure to review your policy to see if wind/hail damage is excluded in your policy. If it’s excluded, you may want to explore a separate wind insurance policy, which is usually a state insurance program.

For instance, the Texas Windstorm Insurance Association (TIWA) sells polices that provide wind and hail coverage when insurance companies exclude it from homeowners policies sold to coastal residents. The average premium on a TWIA policy is approximately $1,600. The annual average cost for windstorm insurance in coastal Florida is about $2,600.

Cosmetic damage from hail may be excluded from home insurance coverage

Still reacting to Katrina and other serious storms, insurers decided in 2013 to use a "Cosmetic Damage Exclusion" for homeowners insurance policies developed by the American Association of Insurance Services (AAIS). The purpose, experts say, was to limit insurers' losses when severe weather resulted in many expensive damage claims by homeowners and other property owners.

"This was a reaction by insurers to deal with the increasing volatility of weather events, which are causing havoc with insurers' loss ratios," says Robert Prahl, a finance author and former insurance claims adjustor in New York.

Insurance companies now have the option to exclude payments for damage to exterior surfaces, including walls, roofs, doors, and windows from hail or wind if the storm impacts the appearance but not the function of these elements. Insurers say the exclusions are necessary to avoid raising insurance premiums to all homeowners.

Some companies may automatically require the exclusion, while others may offer it on a case-by-case basis, according to the AAIS.

The AAIS adds that insurers may compensate homeowners for the lack of cosmetic storm damage coverage by giving them a credit that reduces premiums on the policy's hail and wind damage portion. Barry and the AAIS recommend talking to your insurance company to determine if you'll have the exclusion and if you'll receive a credit.

Also, J. Robert Hunter, director of insurance for the Consumer Federation of America, says homeowners need to find out exactly what the insurance company thinks is cosmetic versus functional hail and wind damage. It may be a gray area that needs to be specified by your insurer, he says.

"A home with siding that's dented keeps working, but it looks terrible and will cause the home to drop in value," Hunter points out. "Insurance companies should make it whole, even if the home still functions. This is a lawsuit waiting to happen because of the ambiguous definition of cosmetic damage."