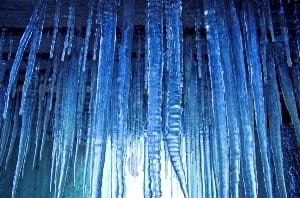 Winter storms are the third most costly natural disaster in the U.S., behind hurricanes and tornadoes. In the last 20 years, wintry weather has caused more than $1 billion a year on average in insured losses, according to Verisk Analytics. ISO, a Verisk Analytics company, says 22 percent of all claims on homeowners policies -- 1 in 5 -- are for cold weather damage.

From burst pipes to collapsed roofs to car wrecks on slippery roads, winter packs a powerful punch. Ice and snow can also be destructive in ways we don't expect.

Before a deep freeze, be prepared for winter-related damage that could lead to a homeowners insurance claim.

1. An ice quake ruined my driveway.

The phenomenon happens when water underground freezes and expands, shaking the ground and making loud popping sounds. News stories report that one ice quake last year caused a 100-foot-long crack in a driveway in Waupun, Wis.

2. A pothole wrecked my car.

Potholes don't make headlines the way blizzards do. Instead they wreak havoc later after the ice and snow melt. Hitting potholes can damage wheel rims or tires, wear out the shocks or struts, and, if you're going fast enough, even bend a piece of the suspension and mess up the steering alignment.

You can file an auto insurance claim if you have collision insurance, but it might not be worth it. A State Farm study found that the average damage from potholes ranged from $300 to $700. Unless your car is severely damaged, you'll collect little to nothing by the time you pay the deductible.

The Ohio Insurance Information Institute suggests checking whether you can get reimbursement from the jurisdiction where you hit the pothole. Some cities have ordinances making them responsible for covering the insurance deductible when vehicles are damaged by potholes that have been reported for repair.

Don't have collision insurance? In Chicago, you can get reimbursed for the repair by filing a claim with the City Clerk's office.

3. A snowplow took out my mailbox.

You can file a complaint against the jurisdiction operating the plow, but whether you get the local government to pay for the damage depends on the situation and local laws. If a private contractor operated the snowplow, then that business's property damage liability insurance might cover the damage.

You could file a home insurance claim for the damage, but keep in mind you would be responsible for the deductible, which may be more than the cost of repairs.

4. An ice surge crushed my house.

An ice surge, also called ice needling or ice shove, looks like something out of a horror movie. Pushed by wind, sheets of ice from melting lakes creep onto shore, busting through windows and doors and destroying homes. The movement sounds like thousands of soldiers marching on broken glass. The bizarre phenomenon occurred last spring in Michigan, Minnesota and Canada.

"Ice surges are not covered under a standard homeowners insurance policy," Worters says. "The homeowner, if they lived by a lake, should have flood insurance."

5. An icicle from my roof injured my neighbor.

The liability portion of your home insurance would pay for the cost of defending you in court and any court awards -- up to the limit of your policy -- if you were sued, Worters says.

Your policy also provides no-fault medical coverage. If someone is injured at your home, the visitor can submit medical bills to your insurance company.

"This way, expenses are paid without a liability claim being field against you," she says.

What if an icicle damaged your friend's car in the driveway?

Unless the visitor can prove negligence in some way, the only recourse is to go to their car insurance policy to cover damage to the car.

Damage from falling objects is covered under comprehensive insurance. Although technically you're not responsible, you could offer to pay the deductible for your friend.