5 ways cops know when UR texting and driving 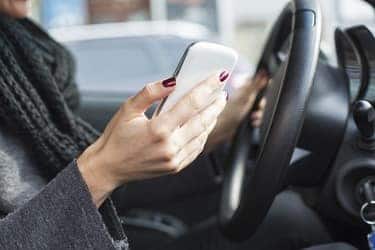 No one needs to tell Americans they shouldn't text while driving. They already know it.

In fact, 98 percent of those surveyed by AT&T in 2013 said it isn't safe to send a text or email while driving. Yet, nearly half of respondents said they text while driving, and four in 10 said it's a habit. Even states with the best drivers aren't immune to this problem.

If people won't stop texting and driving for their own safety, states are hoping drivers will put down their phones to avoid a ticket and fine. Currently, 46 states and the District of Columbia have banned texting while driving, according to the Insurance Institute for Highway Safety. Of those, 14 won't allow drivers to use handheld phones at all behind the wheel.

Despite the laws, some drivers keep on texting and driving. Maybe they think they won't be caught. Maybe they're wrong.

5 ways to get busted for texting In Michigan, the law that bans texting while driving has been on the books since 2010, but the problem persists.

"I see it probably at least once a day," says Steve Bukala, chief of police in Lowell, Michigan.

Bukala notes the practice seems to occur more frequently on the highway than on city roads.

Here are five ways the police know when your eyes are on your phone rather than the road.

1. They see the phone on your steering wheel. 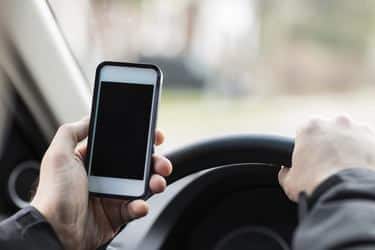 "A lot of [people] aren't even concerned about hiding it," Bukala says. "They usually have their phone right on the steering wheel."

Bukala thinks it's not hard for police officers to drop behind a car and confirm someone is texting.

Don't assume your tinted windows are going to hide your phone either.

2. You are constantly looking down.

Bukala says his officers need to actually see the phone before they can pull someone over for texting and driving, but that doesn't mean you can't be pulled over for other things. If the cops think you're texting, they may look to see what else you're doing wrong.

While Michigan is one of five states where police don't stop motorists for "primary enforcement" of texting laws, most states with anti-texting legislation do allow officers to pull over a driver for a texting offense alone.

3. The glow from your screen gives you away at night. 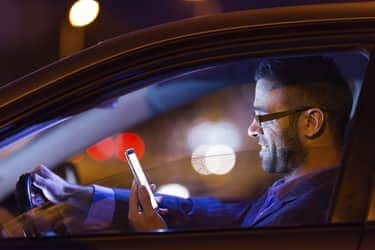 The soft glow from your screen makes it possible to type at night; it also makes it possible for police to see who has a cellphone on in the car. While that's not a giveaway that you're texting, as with looking down constantly, it may attract some unwanted attention.

4. Cops on bikes can peer inside your car. 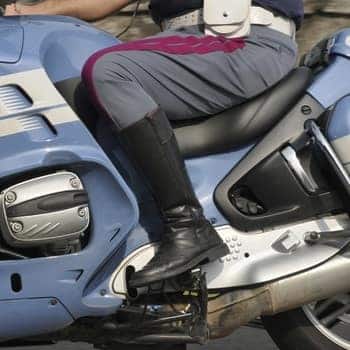 Officers on bikes or motorcycles may be the most likely to hand out cellphone tickets.

"I really notice it in the summer when I'm on my motorcycle," Bukala says. That's because it's easy to pull up alongside a car and peer in the window, especially at stop lights. Then it doesn't matter whether or not your cellphone is in your lap; the police have a clear view.

5. The police are watching you from above.

Cops in some states are upping their game, literally. The U.S. Department of Transportation issued grants in 2012 to Connecticut and Massachusetts to help them develop new ways of cracking down on texting and driving. Those methods include setting up spotters on overpasses to look for texting drivers and notify nearby patrol cars.

In 2013, New York invested $1 million into its efforts to thwart distracted drivers, including those texting. The state's initiative includes the deployment of elevated SUVs that provide a better view into the vehicles around them, giving police a chance to identify those trying to multi-task on the road. 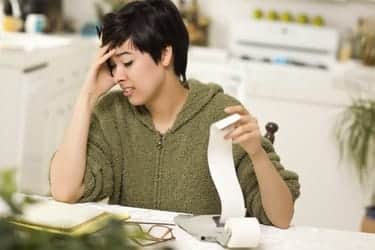 Penalties for texting and driving vary by state. Michigan cellphone tickets come with a $100 fine and two points on your license for a first time offense, Bukala says. Other states may also have fines and/or points attached to violations.

If your state considers texting while driving to be a moving violation, it could be seen by your insurer as a minor infraction. Some insurers disregard a minor violation when it comes to policy renewal, but may discontinue any good driver discount you previously enjoyed. Other insurers may raise your rates with only one ticket on your record, and multiple infractions almost always result in a rate hike.

However, the damage from cellphone tickets doesn't end there. There's also your car insurance to think about.

Texting while driving may also be the basis for more serious charges, such as careless driving or reckless endangerment, if someone's phone use leads to an accident. Those can be major violations, racking up more points and higher auto insurance premiums.

Of course, the cost of car insurance is relatively minor compared to the price someone else might pay because you couldn't wait to read or send a text. "In 2013 alone, 3 million people died from distracted driving collisions," Burr says. "It's impossible when you're looking at [your phone] to pay attention driving."

Avoid the temptation to do something that could get a person killed: turn off the ringer and keep your phone tucked in the glove compartment or purse while driving. Because even if you think you can get away with texting and driving, the cops are onto you.