The town that lived off speeding tickets 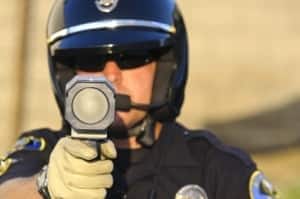 Randolph, Mo., is a tiny town with a common problem: money is tight.

To keep afloat, the Kansas City outpost apparently did what many little towns on big highways do. It came to rely on passing motorists filling its municipal coffers one traffic ticket at a time.

The problem came last year when, 15 years after Missouri passed a law capping certain ticket collections at 35 percent of a town's revenue, the state decided to actually enforce the law.

It's unclear why state auditors suddenly opened the town's books, but upon doing so they discovered that Randolph--population 47--had collected more than three-quarters of its $270,000 budget the year before from traffic fines issued on state and federal roads. By law, money that exceeds the 35 percent limit must be turned over to county schools.

An even greater chunk of change doesn't go toward any public good--city or otherwise. That's the hundreds of thousands of dollars those motorists will collectively pay to auto insurance companies, which almost always raise premiums for ticketed drivers.

A driver with one speeding ticket might pay an additional 20 percent or more for the three to six years the ticket remains on his record, an analysis by Insurance.com found. Multiple tickets could add thousands of dollars to a driver's insurance charges. (For more, see "The $5,000 speeding ticket.")

With towns across the country grasping for funding in recent years, and with the situation only expected to worsen, drivers may want to proceed through all 'burbs with extreme caution. Individual officers may concentrate on public safety, but the data show that departments tend to increase the number of tickets issued during hard times.

Welcome to town, have a ticket

One analysis even calculated an average dollar-to-destitutioncorrelation. A 2006 study by the Federal Reserve Bank of St. Louis ("Are traffic tickets countercyclical?") found that towns increased the number of tickets issued by an average of 0.4 percent for every 1 percent decline in other revenue.

Concerned drivers can, however, take heart in a smattering of laws intended to prevent towns from treating traffic tickets as a revenue stream.

At least three states now limit the amount of income a town can collect from traffic tickets, according to the National Conference of State Legislatures. Arkansas and Missouri cap the overall percentage of a town's budget gleaned from state and federal highways at 30 percent and 35 percent, respectively. New York state prohibits a town's ticket revenue from exceeding the equivalent of $5 per resident, with any excess going to the state's general fund.

Other states appear to be joining the mix. Oklahoma can strip the ticketing powers on state and federal highways from a town that has generated more than 50 percent of its revenue from traffic fines. Vermont and Louisiana are among other states that have introduced similar legislation.

No more ticket money for you

Texas has capped ticket revenue since 1975. During a 1989 revision, the Patton Village police chief became so outraged at the bad press his town received--Patton Village was essentially funding itself through Highway 50 speeders--that he went on a hunger strike, limiting himself to "coffee, water and an occasional beer," the Dallas Morning News reported at the time.

At least Patton Village did not go bankrupt as a result, a fate that befell tiny Macks Creek, Mo., after that state's law was put into effect in 1995. The town, nearly 85 percent funded by passing motorists, had issued a ticket to the wrong driver--one with the right connections. That driver was a state legislator, and he promptly went home and drafted what is now known as Macks Creek Law, the legislation that caps the percentage of a town's budget gleaned from state and federal highways at 35 percent.

These days, several other states try to discourage any abuse of police powers by essentially minding the treasure chest. Certain traffic tickets--typically including speeding violations on highways--are automatically processed by the state, which then returns a set amount to the issuing town.

In California, for example, towns keep about 20 percent of the driver's fine for speeding. In Connecticut, towns get just $10 a ticket. The state of Massachusetts keeps about half of the portion of the fine that exceeds $50.

"It seems to work," says Robert Katims, a lawyer with Hoff Curtis, in Burlington, Vt. "There is no incentive for people to set up speed traps because they don't keep the money. The money goes to the state."

But beware the holes in any system. The National Motorists Association, a drivers' rights group, cautions that because some tickets don't get routed through the state, an officer merely has to rephrase the violation a bit.

The full fine then goes directly to the city or town and the baffled driver, initially pulled over for speeding, heads home with a citation for, say, inattentive driving.

"Some city administrators game the system by having their police write tickets for local ordinance violations rather than for speeding, in order to avoid mandatory reporting to the state," says Gary Biller, motorist association spokesperson.